The R&D tax credit scheme is a UK government scheme that is aimed at rewarding and incentivising innovation in the private sector.

Companies can file an R&D claim annually for the costs of qualifying R&D activities that the company carried out in that accounting period (i.e. their company’s financial year) – more on this later.

In general terms, the value of an R&D tax credit claim is dependent on qualifying expenditure – how much the claimant company has spent on activities that are considered R&D for tax purposes. There a few scenarios that affect how the claim value is calculated and we explore these in more detail below. To skip ahead to the calculation section of this page, click here.

If the claiming company is profitable, the R&D costs can be used to reduce the company’s tax bill to a far higher degree than the usual deductions. If the company is loss-making (i.e. if it does not owe any tax for that year), the claim benefit can either take the form of additional losses that can be carried forward to future years, or the losses can be surrendered for an immediate cash benefit.

2. Who Is Eligible to Claim R&D Tax Credits?

In order to make an R&D claim, a company must first be subject to UK Corporation Tax. This typically means that it is registered in the UK as an LTD or PLC but additionally, if a branch of an overseas company has a UK presence and is also subject to UK Corporation Tax, then it can also benefit from the scheme as can a partnership of limited companies.

The eligible R&D work does not necessarily need to take place in the UK. However, the work in question does need to be funded (at least in part) by the UK-registered company. An example of this is a UK company that subcontracts some of its operations to a company that is based overseas.

The legislation that governs what activities can be included in an R&D claim is based around two main conditions:

This means that the activity or project in question should theoretically add to the pool of technical knowledge that is currently available in the industry. We say ‘theoretically’ because the company activity and related IP are not actually released to the public during the claim process.

In practice, as well as gaining new knowledge, a technological advance may be achieved by developing something new or appreciably improving something that is already known in a field of science or technology. This could be the creation or improvement of a product, process or method. There is a misconception that the R&D tax credit scheme is only relevant to science-based sectors. This is simply not the case as eligible R&D work can take place in any sector, providing the criteria are met.

Also, it is the processes involved in the work that count towards eligibility rather than the end-result. For example, if a company creates something that looks identical to an existing product on the market, but it used a new or improved method to make it, it would still be able to claim through the scheme.

The definition of technological uncertainty is where a solution to a technological problem is either not publicly available or readily deducible to a competent professional. In other words, the solution can’t be in the public domain and can’t be obvious. If others have achieved the same thing but it’s a trade secret or you have a unique environment, then your work can still qualify.

Therefore, in order for a project or activity to qualify, it can either be unclear whether the project’s technology goals can be achieved or how to achieve them in practice. This implies that the project presents a challenge that falls outside of the sector’s norms and there is a certain level of technical risk that exists in terms of the project’s viability at the outset. The project does not necessarily need to be a success by any measure to qualify. Again, it is the process that is looked at rather than the end result. 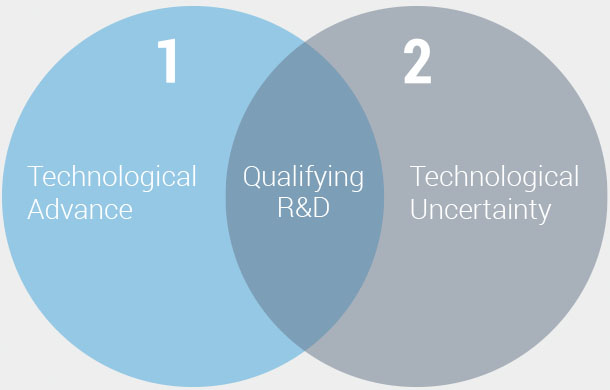 2.3. Examples of Eligible Activities by Sector

While you can claim in any sector and there are countless ways in which a company can qualify, we have compiled a brief list to give you a general sense of the activity-types that would typically qualify: 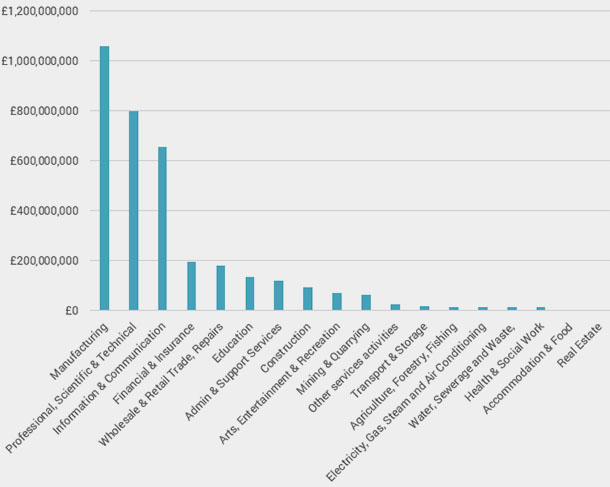 3. Costs that can be included in an R&D Tax Credit Claim

The following costs can be included in a claim when they are incurred on directly resolving technological uncertainty on a qualifying project:

4. Costs that cannot be included in an R&D Tax Credit claim

5. How to Calculate an R&D Tax Credit Claim

There are two main types of R&D claims and each are calculated differently: If you have less than 500 employees and have a turnover of under £175,000,000 you would typically claim under the more lucrative SME Scheme. If you don’t meet both of the above conditions, you can still claim under the RDEC scheme.

Below are the various examples of how a claim value is calculated:

There are further factors that can affect how a value of a claim is calculated. For example, if your company’s R&D is subcontracted to another company, you would only be able to include 65% of the subcontracted R&D costs. For more information on this, click here.

A company that is looking to make an R&D claim must choose between delegating the process to their in-house finance teams, external accountants, R&D tax specialists or a combination of these. There are pros and cons to each of these approaches. To make this decision, a company could factor in:

The claims process typically consists of the following actions:

A successful R&D claim is usually paid out within 28 days of submission unless the case load of inspectors is particularly high or if the claim is queried or rejected.

It’s worth noting that when companies don’t follow best practices during preparation of an R&D claim of if they include something that breaches the legislative rules governing the scheme, this may trigger an HMRC enquiry.

An enquiry can range in severity from HMRC simply asking for additional information relating to a certain part of the claim, to them rejecting the claim outright.

In the worst case, they can demand repayment of R&D funds (plus interest and penalties) that the company has claimed in previous years if they conclude that similar breaches were made in previous claims.

To find out more about how to avoid an HMRC enquiry, click here.

Although the R&D tax credit scheme remains an excellent way for companies to offset the expense of innovative activities, many companies miss out on significant annual claims each year due to a lack of awareness of the scheme or misconceptions about it.

This is particularly true for certain sectors. For example, in the year 2016-17 construction firms made a total of only 1,365 R&D claims despite there being an estimated 314,590 construction-based businesses in the UK.

Figure 3: The number of R&D claims filed, by year

If you would like to find out whether your own company is eligible to claim R&D tax credits or you would like more information about the scheme, we would be glad to help.

At the minimum we would be able to give you a definitive answer about your eligibility and give you an accurate idea of the potential value of your claim at no obligation to you.

R&D Tax Credits for Civil Engineering:
A whitepaper by Innovation Plus