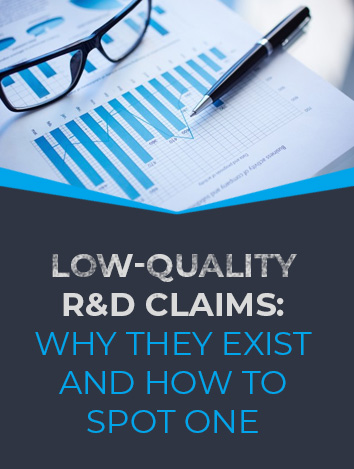 Last year, a report from the Office of National Statistics found that low-quality R&D claims were the ‘main cause of lost tax’ in the UK. This has brought into focus the high number of R&D claims that are filed each year that don’t meet the required standards – either in claim preparation, eligibility or both.

A low-quality claim usually has one or more of the following features:

In our experience of years of speaking to clients and prospects and assessing their previous claims, the root cause of low-quality R&D claims comes down the wide disparity in expertise found in the R&D claims sector.

The ‘repeat offenders’ who typically produce them range from R&D claim firms that rely on a ‘high volume, fast turnaround’ business model, to finance professionals that are prepared to ‘learn on the job’ to secure an additional revenue stream at the expense of the claimant company and the scheme in general.

Unfortunately, over the years we have seen too many cases of corner-cutting and poor knowledge of best practices in claim preparation. These practices invariably lead to triggering an HMRC enquiry or the company losing out on funds by filing a non-optimal claim .

For example – recently a global architecture firm approached Innovation Plus to discuss their case after their last R&D claim triggered an HMRC enquiry. We found that the firm who prepared the claim (a very well-known and established brand in the R&D claim sector) had not only carried out a poor claim preparation but had also likely under-claimed by a wide margin.

In other cases, we have come across such claims being prepared by in-house staff as a cost-saving measure. This is often a false economy: Specialists who are experienced in preparing R&D claims in a particular sector will often be able to secure a significantly higher claim amount by having a more complete picture of all the technical and legislative aspects of the scheme.

The risks of filing a low-quality R&D claim

Apart from the lost revenue that often results from filing a less-than-optimal claim, below are some further details about the associated risks:

HMRC Enquiries
Enquiries are often time consuming and become a big drain on resources at various levels of the claimant company. Often, the person who prepared the claim in the first instance is unable to effectively defend it. A company that triggers an enquiry is likely to be scrutinised much more closely when filing future claims.

Loss of tax to HMRC
The aim of the R&D Tax Credit scheme is to strengthen the UK’s economy through encouraging genuine innovation. When the scheme pays out undeserving companies, less funds become available to other institutions in education, healthcare, social services and others.

Punitive effects on the scheme
If the amount of lost tax coming from low-quality claims continues to be high, HMRC may look for ways to impose limits and caps on the scheme that may inadvertently harm companies that are carrying out genuine innovation.

An example of this is the PAYE cap that is due to take effect in April 2021. There is already wide concern in the industry that this measure might inadvertently punish loss-making companies that are carrying out genuine innovation but are subcontracting out much of their R&D as a cost-saving measure instead of hiring full time staff.

The reality is that until now a high number of low-quality claims were filed because there was an expectation that they would continue to be be paid out. However we are seeing this is changing: HMRC have invested in more staff and are determined to reduce the amount of lost tax with measures such as the PAYE cap.

We have also seen an increase in companies that approach us for help after triggering an enquiry – an indication that HMRC are reviewing claims with a more critical eye.

This makes it more important than ever to ensure that best practices are followed in claim preparation and that your claims can hold up to any level of scrutiny.

In our next article, we are going to publish a brief questionnaire that will help you to assess the risk level of your R&D claim.

If you would like some obligation-free advice on your current R&D position, contact one of your team members here.